You are here: Home>Events>Celebrations and Events>Market Square decorations, peace celebrations 1945 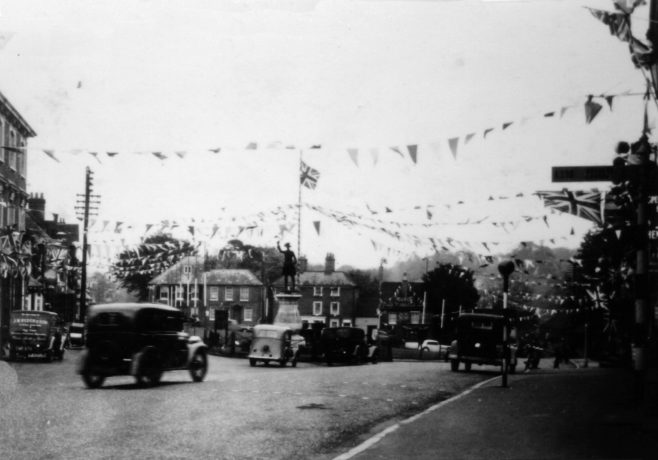 June Heath “…At the end of the war the community feeling here was terrific, there were parties at Charlie Sharp’s garage and in all the Pubs, everywhere was alive and, everyone was very friendly – the community feeling was something that I felt or noticed that I hadn’t so much through the war years, and it seemed to last quite a while, there was definitely more pulling together. Things have changed though, I remember a time when I would go up the town and I knew everybody, now I can go up there and I might not know anybody, but it was a much smaller place then…”

Margaret Brown “…the VE celebrations were wonderful, we felt then that we had got our freedom back and you could start to enjoy yourself again – you didn’t have to carry the gas-mask any longer. But I think it must have been eighteen months to two years before things settled down and seemed to have got back to normal. Even five years later, sweets were still on ration, but I remember Mrs Burgess sometimes used to turn a blind eye to the amount you were supposed to have…”

Bob Combley “…We had a big bonfire, which I think was at the back of old Whitey’s shop on the sandbanks. I do remember that we looted some explosives  from one of the many ammunition dumps that were all around Westerham, and we made our own fireworks, but it wasn’t a memorable time for us boys. The war and especially the Battle of Britain was enormously exciting and great fun, sad to say, but we were boys, I was nine when war broke out. When it ended we were young boys of fourteen and fifteen and we had never doubted that we would win the war – of course we would! – so the relief our parents and older brothers and sisters felt was not something we experienced…”