You are here: Home>Events>Celebrations and Events>The Green on Fair Day 1908 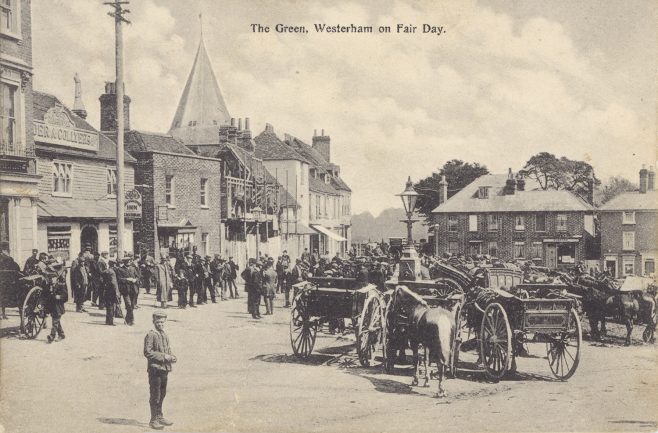 The Green on Fair Day

During the 1900s Westerham held an annual fair day on May 3 which was initially held on the Green, but moved to market field some time after 1910. The market day would include swings, roundabouts and stalls, but would also be a day of livestock trade.

In 1907 Hookers Almanack ‘Epitome of Events’ records: ‘3 May Westerham Fair-day. Attendance good, but cattle for sale not so numerous as usual…’

An annual carnival had been started in the early 1900s as Hookers Epitome for 1902 records: ‘Nov 6 Westerham Carnival. Brilliant illuminated procession paraded the town, and the prizes for decorated cars, tableaux, and costumes, afterwards distributed in the High Street by Mr Maxwell DelaCombe, chairman…’

Various annual summer celebrations came and went during the years either side of the First World War, being either summer fetes to raise money for a local charitable cause, or an adjunct to another annual event such as the horticultural show.