You are here: Home>Events>Celebrations and Events>Gala entry from Peter Myhill, Ray Jenner and Derek Taylor 1955 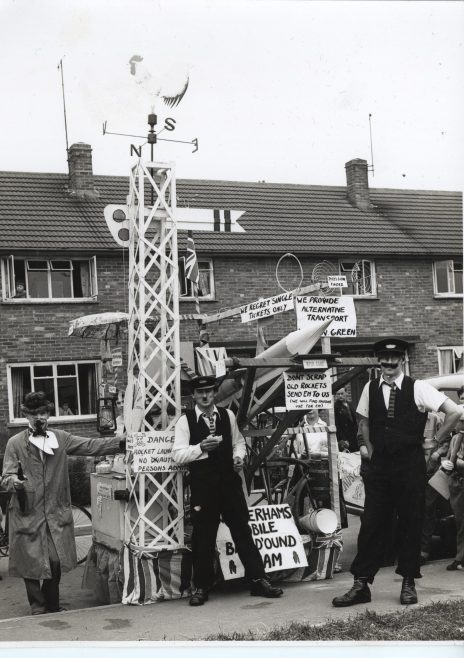 For the 1955 Gala, Peter Myhill, Ray Jenner and Derek Taylor created a space travel themed float.
Peter Myhill described the photograph  “That’s the rocket, in another shot I can’t find, you could just about see it in flight, with a bit of smoke around it – I can’t go into detail about how we achieved that!   John Hooker filmed the rocket being launched. We didn’t dare fire it before the judges saw it, but we did fire it on the Green. Everything was wrapped in crepe paper to get some colour into it – we couldn’t paint it as the materials all had to go back to Caffyn’s Garage afterwards.
Derek Taylor built the railway signal with a cockerel weather vane on the top. He and Ray Jenner and I went around together and would say each year  ‘what are we going to produce for this years Carnival?’ and it would just snowball from then on, they would turn my pencil sketches into reality. Ray was a very clever man and a much respected cabinet maker…”