You are here: Home>Events>Celebrations and Events>Wolfe Aylward invite at-home to wounded soldiers 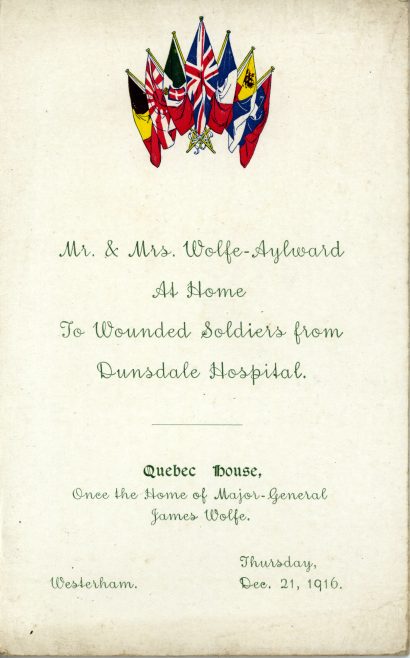 25 August 1917 the Westerham Herald ran the following story:  ‘Wounded Canadians at Westerham. A further party of wounded soldiers from the Ontario Military Hospital in Orpington visited and were entertained by Mr and Mrs Wolfe-Aylward at Quebec house on Saturday last. They took great interest in the history of Westerham’s famous soldier so indelibly etched in their history and they all took away photographs of Wolfe’s home and the statue on the Green when they returned to their Military Hospital at the days end’.

And that same year, with financial backing from the Learmont estate and another wealthy Canadian, Sir Campbell Stuart, the house was bequeathed to the National Trust.
Quebec House remained the residence of the Wolfe-Aylwards where they served to act as steward-custodians until 1930 when they retired and returned to Farley.