You are here: Home>Events>Celebrations and Events>Crowd at the laying of the Legion Clubhouse foundation stone 1928

Crowd at the laying of the Legion Clubhouse foundation stone 1928 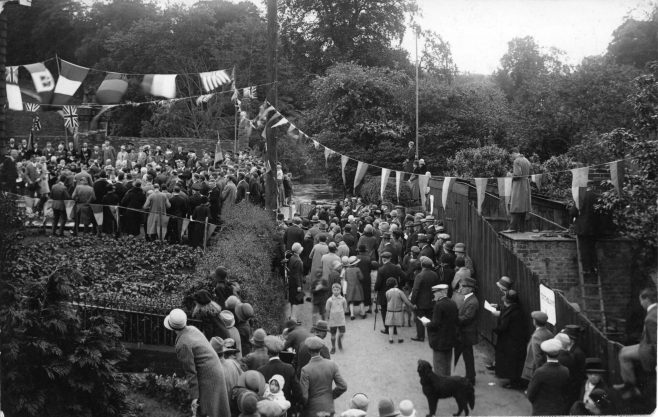 crowd at the opening of the Legion

The Royal British Legion was formed on May 15 1921 to bring together four national organisations of ex-servicemen that had established themselves after the 1914-1918 war. These were the Comrades of the Great War, the National Association of Discharged Sailors and Soldiers, the National Federation of Discharged and Demobilized Sailors and Soldiers and the Officers’ Association.
In 1921 an ex-servicemen’s organisation already existed in the town in the form of the ‘Comrades of the Great War’ which had been established in 1919 under the Chairmanship of Lt-Colonel Bonham-Carter.
With the formation of the British Legion country-wide, the local ‘Comrades’ agreed to found a Westerham Branch of that organisation. At a meeting of the newly formed local branch presided over by Lt-Col. H Bonham-Carter on April 7 1927 some sixty members were enrolled.


And things were on the move – from Hookers Epitome of November 19 1927 ‘…a significant meeting of the local branch of the British Legion accepted the generous gift of Mr John Warde – a site for the erection of permanent headquarters on Mill Lane, behind the forge…’
Association with the Churchill family can be seen at this point, as Miss Diana, Churchill’s daughter, laid the foundation stone for the new Legion Headquarters on June 9 1928 watched by large crowds. The photograph is courtesy of Frederick Benson.