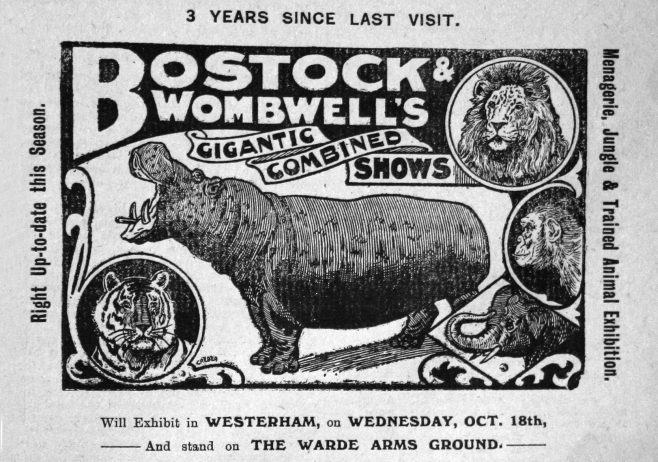 Not the only Circus to visit the town, but possibly the most interesting, in 1913 Bostock & Wombwell brought a scary menagerie to the field behind the Warde Arms including a hippopotamus – I wonder what their public liability insurance was like…

Alongside that monster the circus promoters claimed there would be …Educated Chimpanzees, Almost Human Apes, the only Bengal Tigers travelling, the only Performing Polar Bears travelling, the only Sacred Baboons travelling, the only Mounted Zebra travelling, the only Horned Horse travelling, the only Snow Leopard travelling, the only Laughing Hyena travelling, the Great Collection of Lions, Baby Lions, recently christened at Portsmouth by the Mayor, Sir John Corke.  Also showing ‘Jerry’ the Great Blue and Red Faced Mandril Gorilla. And last but not least, ‘Jenny’ and ‘Nona’ the Indian Elephants. Jenny is the largest elephant in Great Britain, being nearly ten feet high. See her push the Heavy Wagons into position – a sight for a lifetime.  There will be a magnificent Stud of Horses, and Two Powerful Engines used for haulage and producing the ELECTRIC LIGHT – every den in the Menagerie being separately illuminated.  See our splendid military band, don’t miss the great show on this occasion. Descriptive lectures and full performances each day at 3.30, 7.00 and 8.30pm…  Wow!