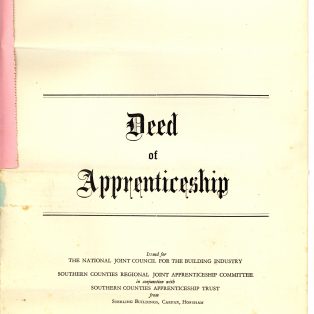 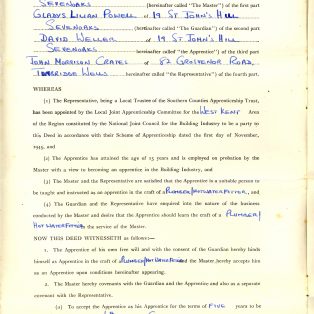 Having secured his formal Deed of Apprenticeship with builders Stanley Berwick in Cramptons Road Sevenoaks, David started on his first trade position, that as plumbers apprentice working on Hartley Road, Ash Road and Oak Road in 1954-55:   “…I started there in September 1954 when I left school, I’d taken a summer holiday from June and had got the job through someone at the Church I attended in Sevenoaks – you know, wheels within wheels, a little old lady there knew Mr Berwick who had the contract for that London Road development and I was taken on for a six month trial as plumbers apprentice. Being brand new to the work I knew nothing, but after three months I was given less ‘dogs-body’ jobs. The plumbing was good quality iron barrel with lead ‘shorts’ so I was shown how to ‘wipe’ the joints with brass intersections. After 88 houses I got quite good at it – he laughs. I also prepared and dressed all the lead flashings round the chimneys and became a really good lead-man. We were all on bonus, so as the boy, I cost less if I wasn’t so quick. All the pipework threads were hand-cut as there wasn’t any power on the site until right at the end – that was the last service to go through.