A walk around Verrall's Corner 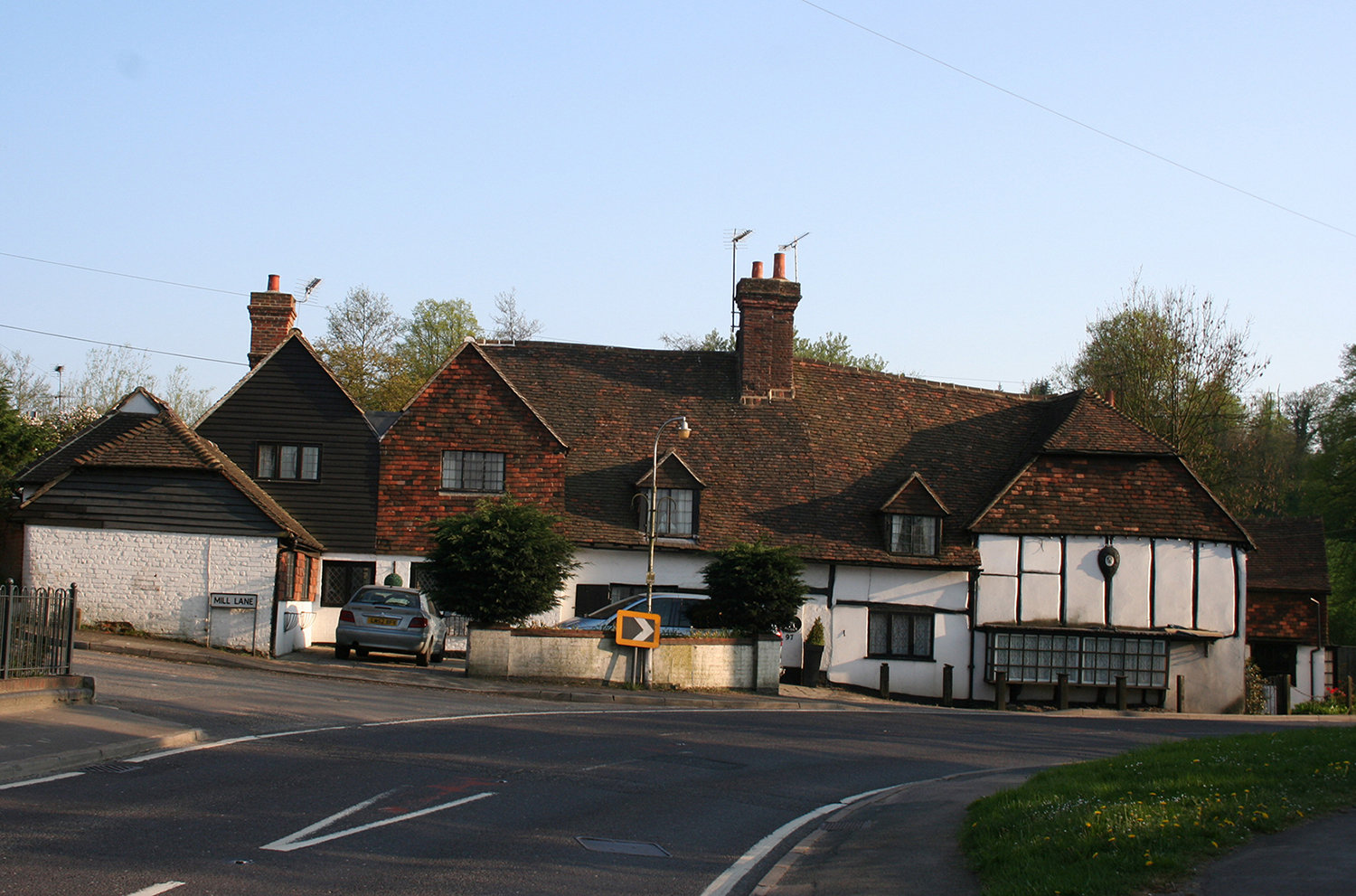 This first image shows the forge and associated cottages today with Mill Lane leading off behind the forge on the left. Known as Verrall’s Corner in memory of the smithing family who were resident here for so many years, this has always been the place to slow down on the way into Westerham. Once because it was quaint but quite busy, whereas today, while driving  round this quite severe bend in the road, you look out for HGVs and wayward pedestrians. 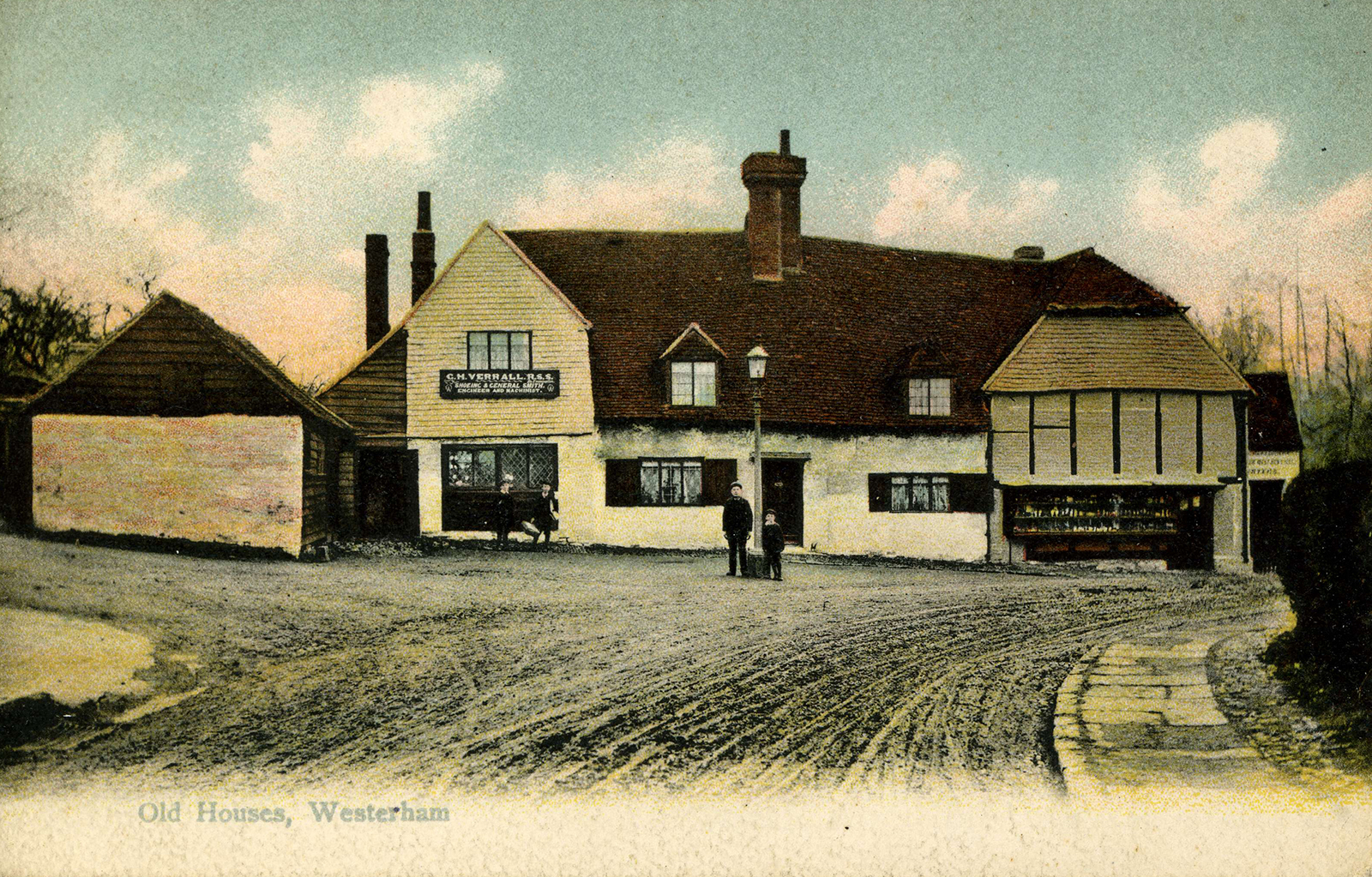 This hand-painted ‘aquatint’ photograph taken around 1900 shows the same site before the arrival of a tarmacadam road surface and the busy traffic of today. Quite a tranquil scene, and no fear for the young boys standing by the lamppost. The building to the right of the forge was in the early 1900s a grocers and sweet shop. In the 1920s it became an antiques business which lasted until the 1970s, at which point it was sold as a private residence. 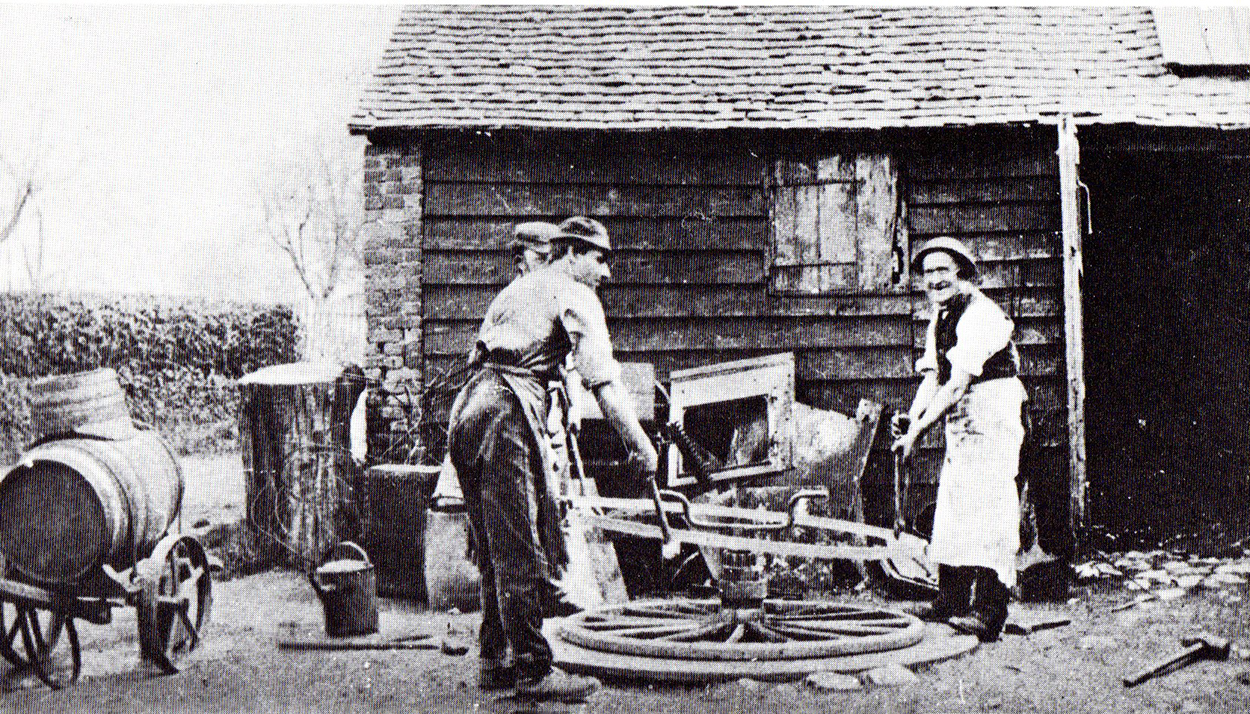 Stepping back in time another forty years, this early photograph circa 1880 shows a new iron ‘tyre’ being dropped onto a carriage wheel. George Verrall is the man on the right with the white apron. His son Hubert is on the left wearing the bowler hat. Note the water cart and watering can which will be used to shrink the iron tyre onto the wooden wheel rim. 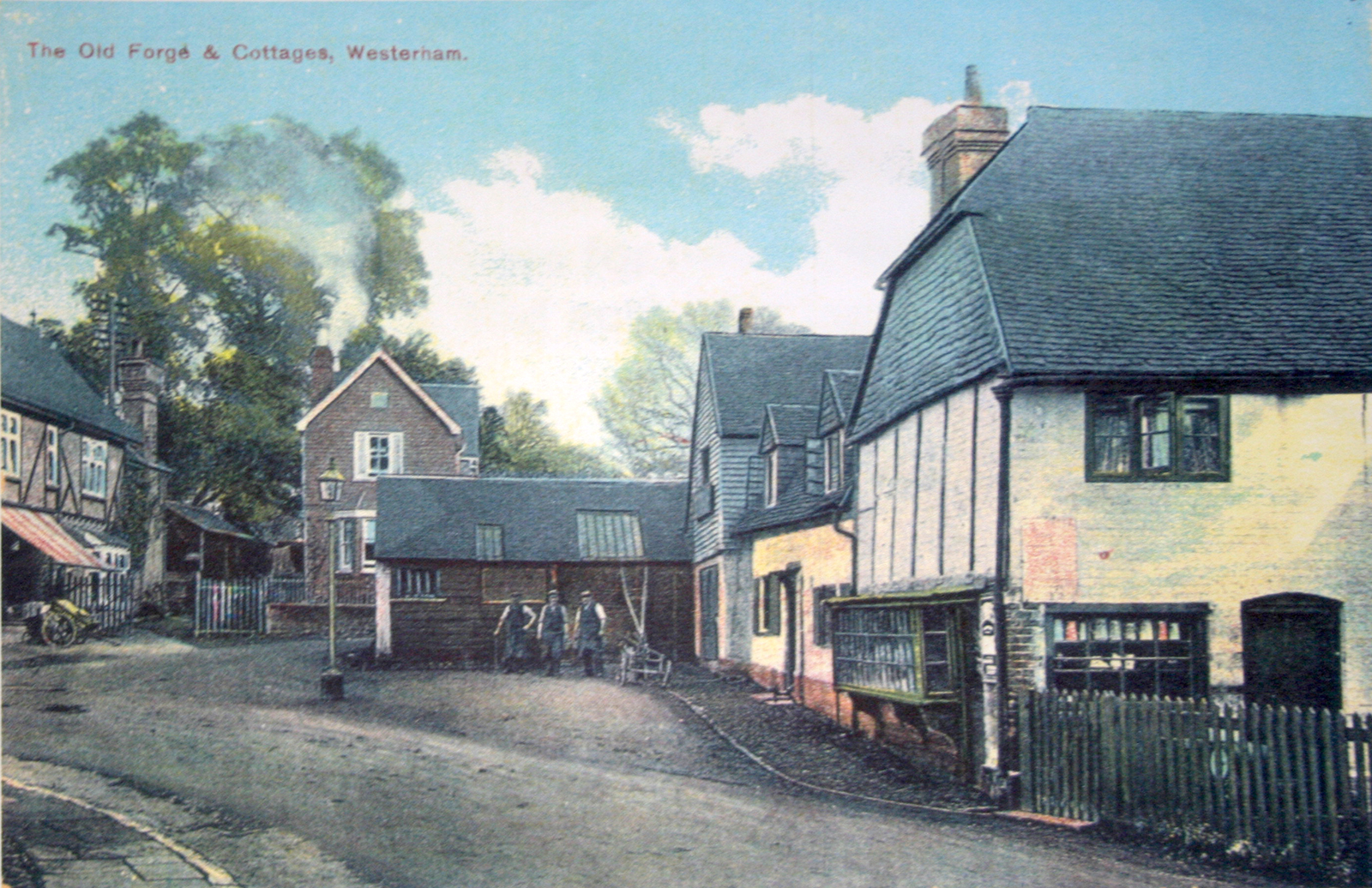 Another aquatint from the early 1900s shows three blacksmiths outside the forge, the little sweetshop foreground right and Edwin Sutton’s grocers in the background on the left with the blinds down to keep the window cool. Note the British Legion clubhouse sited next to the cottage behind the forge had not been built when this photograph was taken. 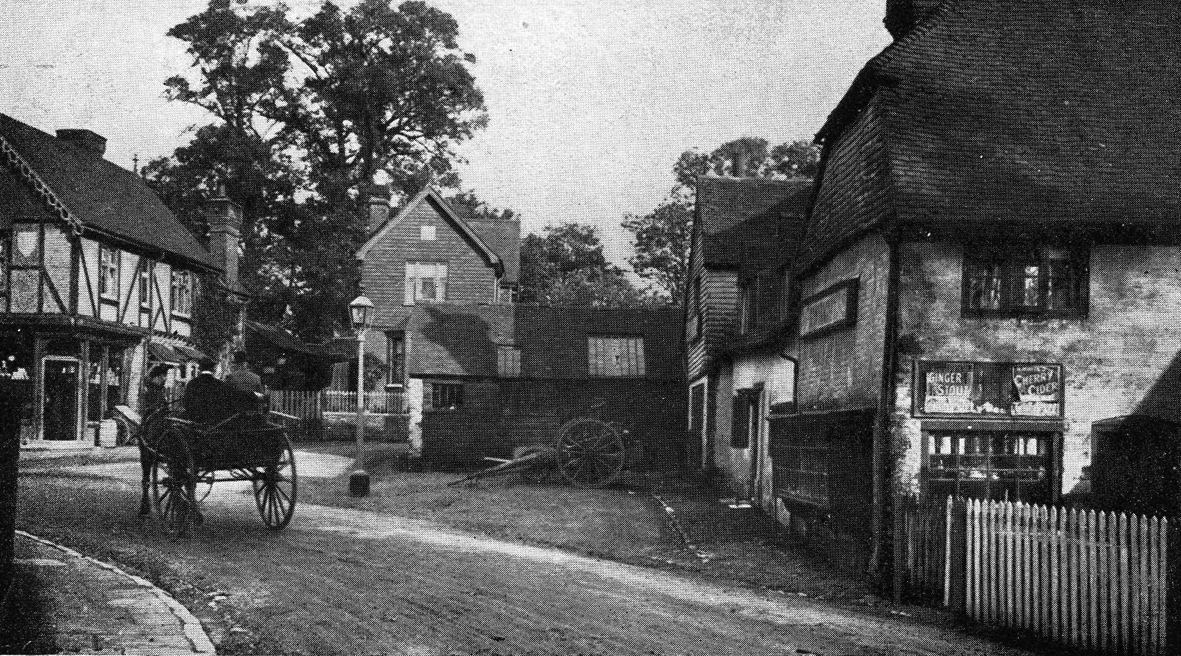 A similar scene circa 1912 shows the little sweet shop facing us on the right hand side of the picture, advertising ‘cherry cider’ and ‘ginger stout’. It would appear to be around 4 o’clock on a summers afternoon judging by the chimney shadow on the roof of the forge, and may well be a Sunday, as the forge is shut and the blinds are drawn in on Suttons shop. The gentlemen in the two wheeled ‘fly’ seem well attired with Sunday best hats, or was it the local doctor on his rounds…? 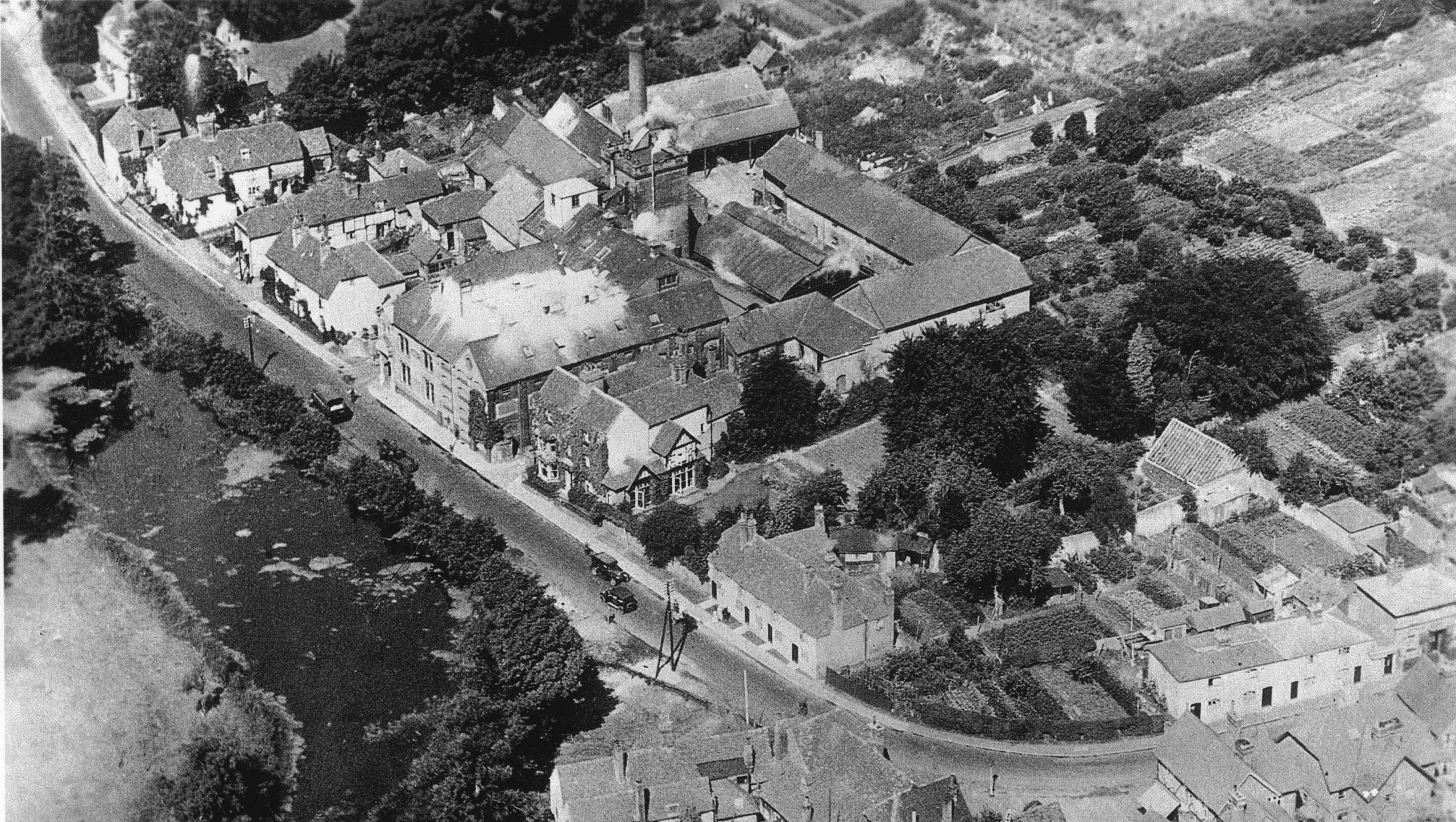 Aerial photograph from 1920s showing allotment gardens on the bend and two of the Brewery Cottages on the right which were demolished by a bomb in WWII and never rebuilt. In the 1960s another building was added, set back behind the remaining cottages and designed to look Victorian. Known as ‘Coopers Cottage’ this reminds us of an early skilled trade within the brewery – that of making wooden barrels. The Black Eagle brewery can be seen opposite the Long Pond, and the strange whitening adorning the roof  area was whitewash applied by young apprentices to reflect the suns rays and keep the loft space cool  for the storing of hops. Note that the total footprint of the brewery was vast and it is not surprising to learn that the brewery was the largest single employer in the town. 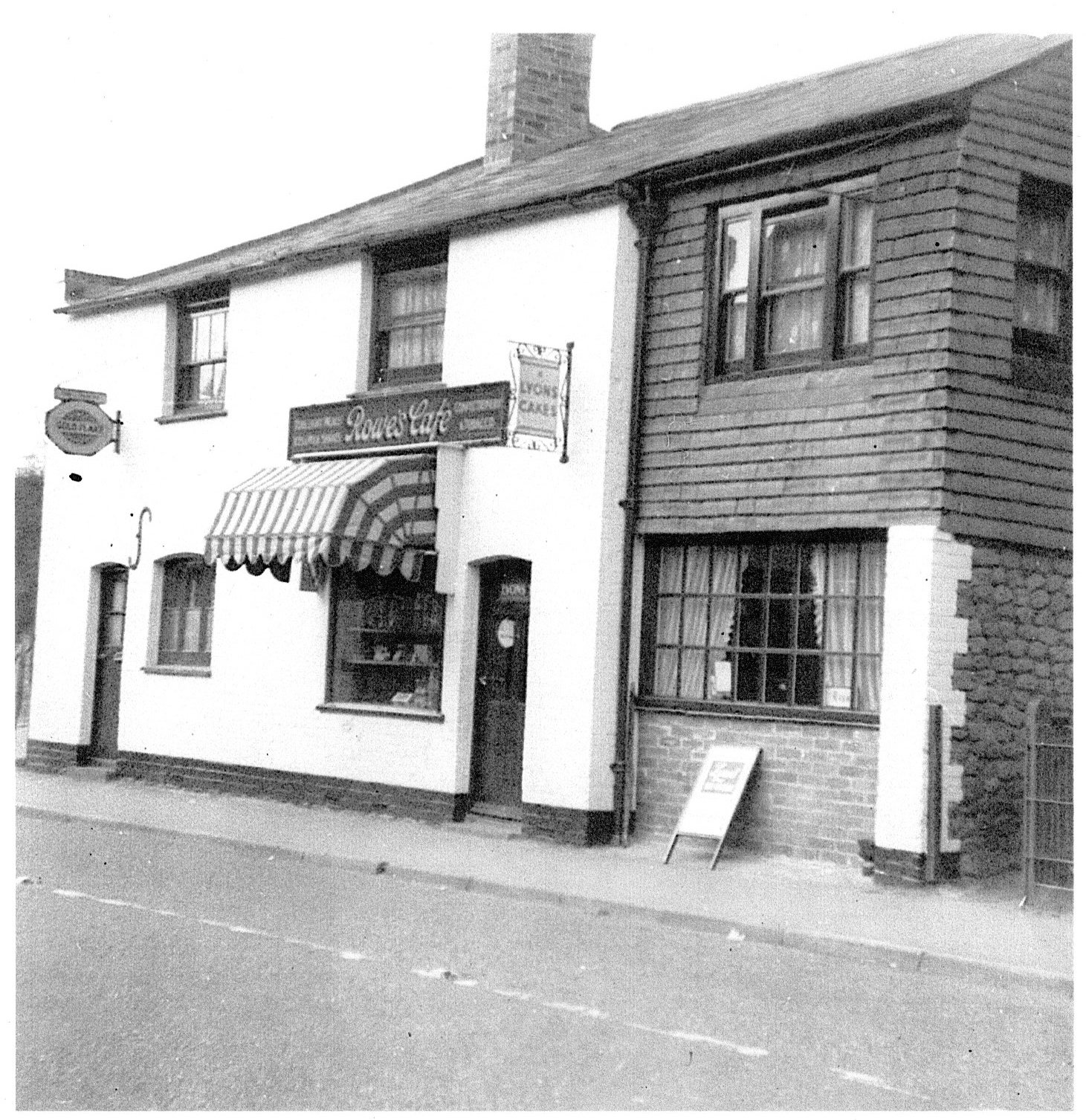 At the end of the row of brewery cottages to the right of the green allotment area stood English’s Cafe and sweetshop, seen here circa 1960 when it was known as Rowe’s. A steamy, busy little cafe, popular with the brewery workers as it was on their  doorstep and one of the few places for a quick bite to eat at the  west end of town. 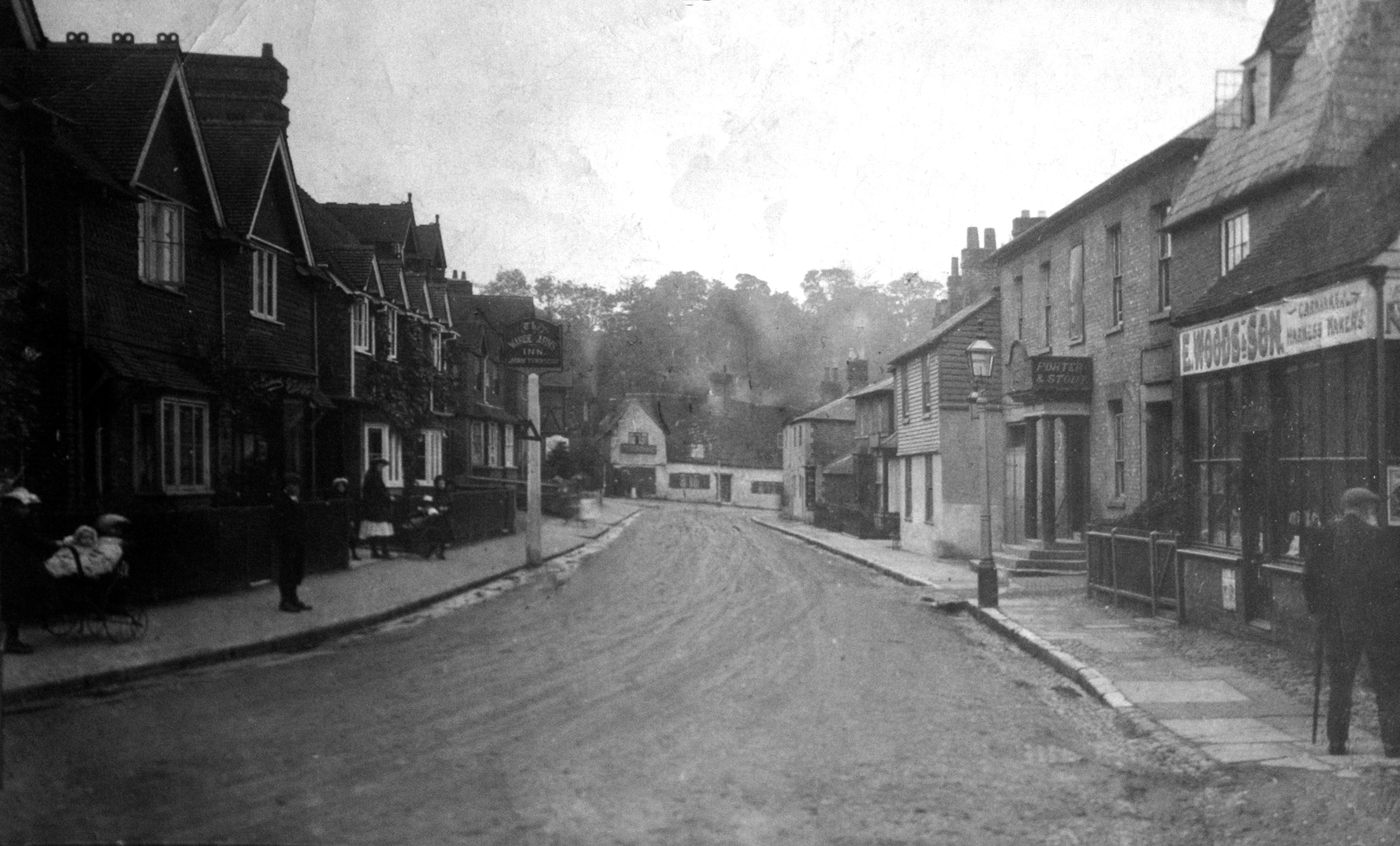 This rather gloomy view from the 1920s shows the forge in the middle-distance, The Warde Arms Inn just beyond the lamppost on the right, and Edwin Woods harness makers shop and saddlery in the foreground-right. Note that the pub sign stood on the opposite pavement at that time. 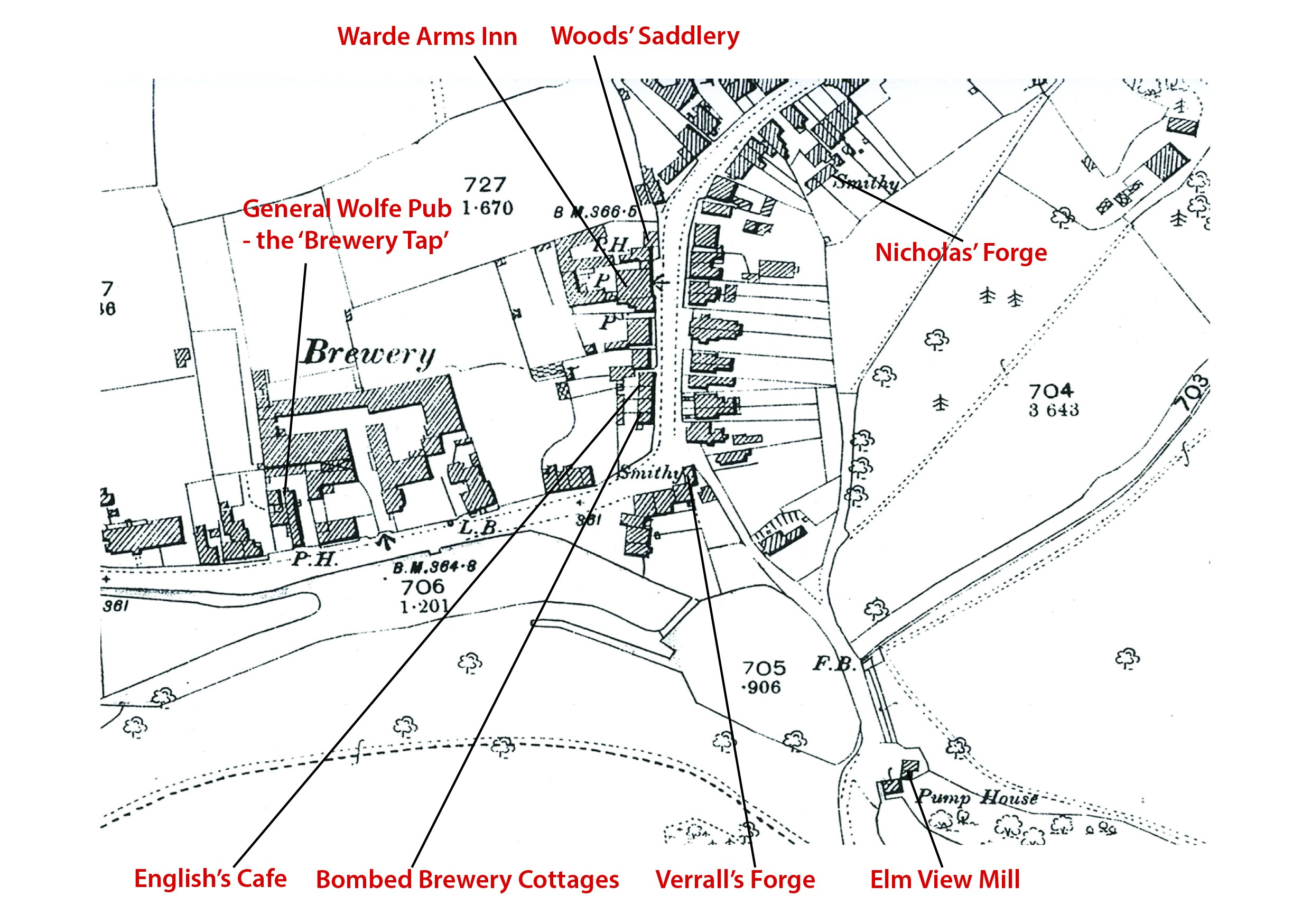 This map from 1896 is useful to show where all these places were in relation to each other. Bottom right of the map shows the site of Elm View Mill shown in the next photograph. You will notice that on the map it is called ‘Pump House’. In 1881 the Westerham Water Company was formed with the sole purpose to deliver fresh water to the whole town. A deep well was sunk to the aquifer just in front of Elm View Mill, and the water mill was converted to drive ram pumps instead of the corn grinding stones. The pumps were used to pump fresh water from the aquifer up to an underground reservoir high on the hill in Squerryes Park. From there water was fed by gravity to the whole town through a network of water mains. The reservoir still exists, though it has been out of service since 1907 when the pump house ceased to be needed, as a vast new reservoir had been built just north of Clackets Lane on the Surrey border. 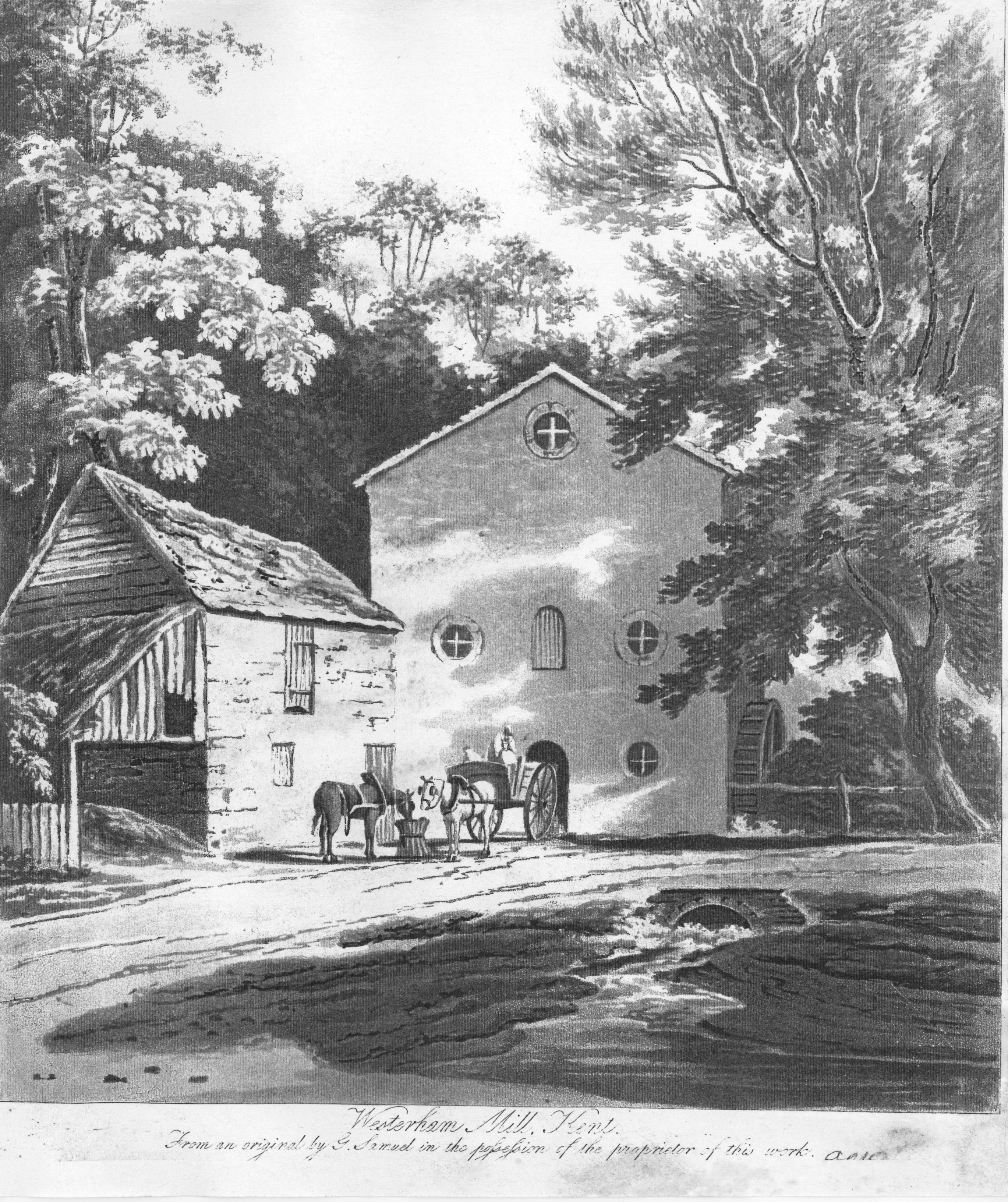 The earliest evidence of its working life, this engraving of the distinctive stone Elm View Mill sited down Mill Lane behind the forge dates from the 1700s. A degree of artistic licence may have been used, or it could have been that the outflow from  the wheel-pit was routed through a brick culvert to enter the Round Pond as depicted here. It is not possible to tell by looking at maps from the 1800s whether this was in fact so. 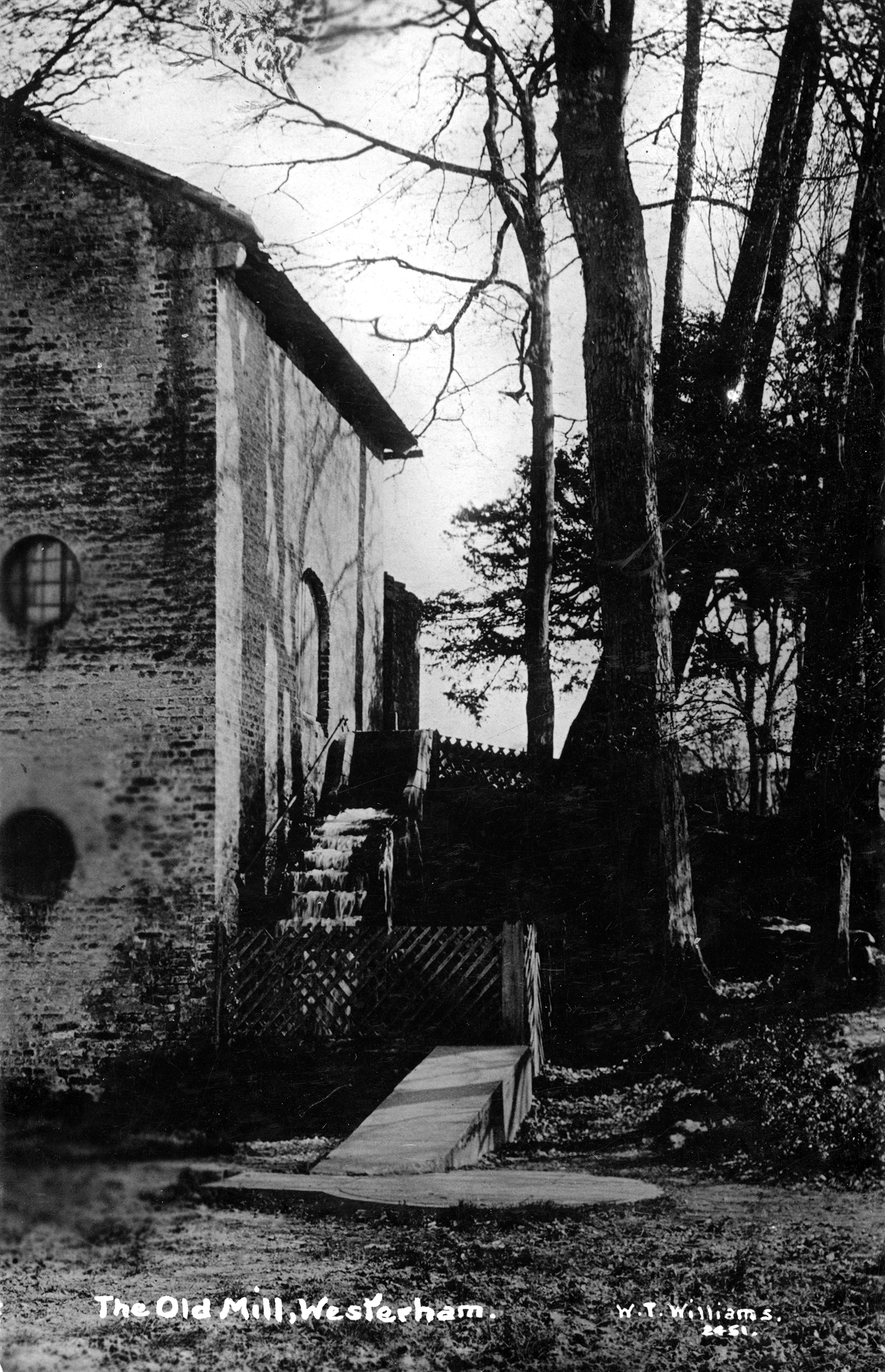 A close-up of the ‘business’ side of the mill during its ‘pump-house’ days. The overshot wheel of 1868 can be clearly seen, which was used to drive the ram pumps via a modified gear using an epicyclic power take-off. The ram pumps are under the sloping cover leading below the circular well cap, all of which has long gone. The well itself was filled-in and buried for safety reasons when pumping ceased on May 12 1907. 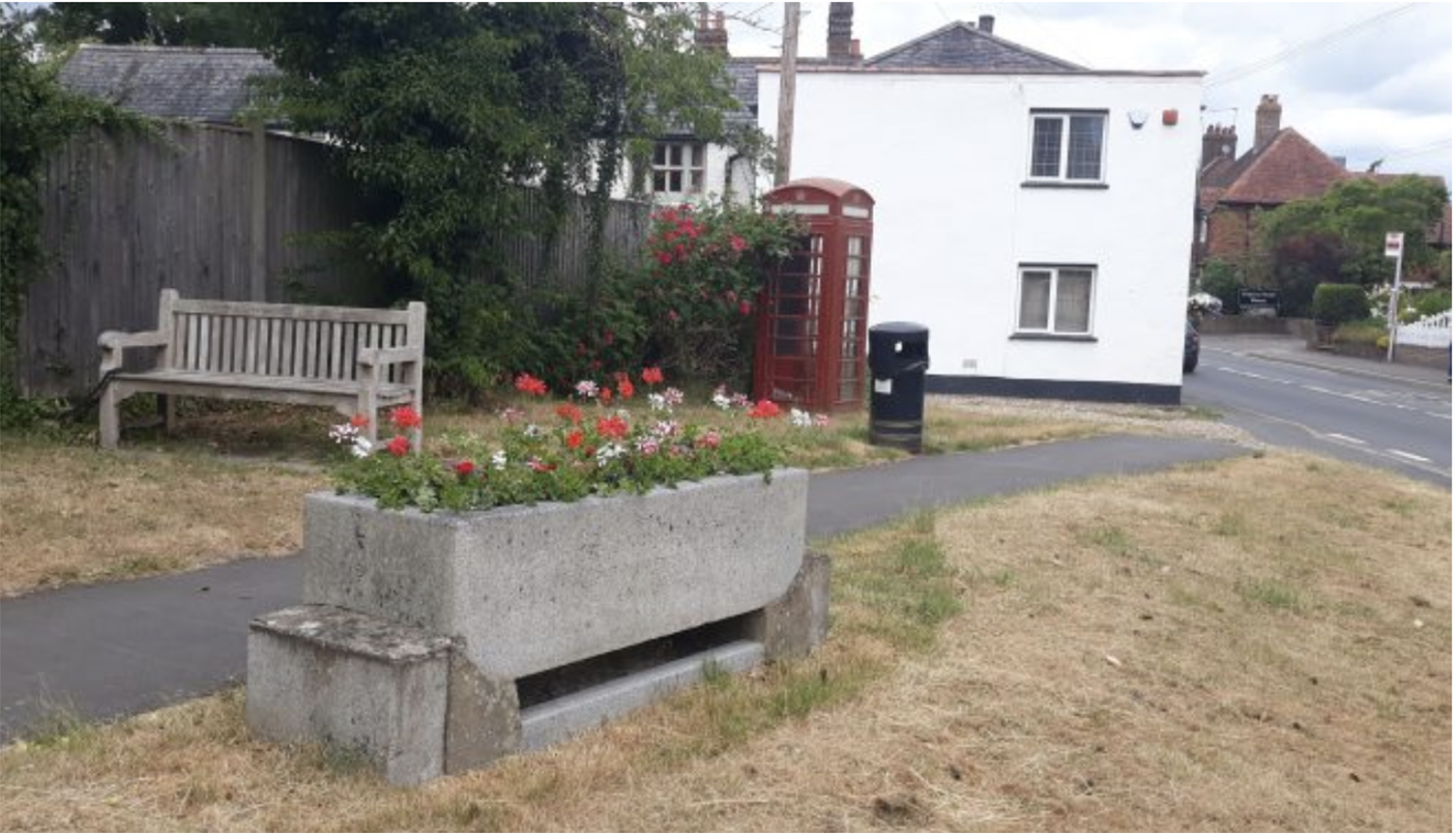 The Horse Trough was originally sited by the Victoria Jubilee Fountain on the Green. Dating from 1902, fountains always bear the date of their installation, but this one also carries the following inscription “Here is water prithee think Does your Dumb friend need a drink” The telephone box dates from the 1950s and the bench – sadly stolen in September 2020 – was installed to commemorate the Queen Elizabeth Diamond Jubilee in 2012