You are here: Home>People>Health and welfare>WWII RedCross with Dr Hay 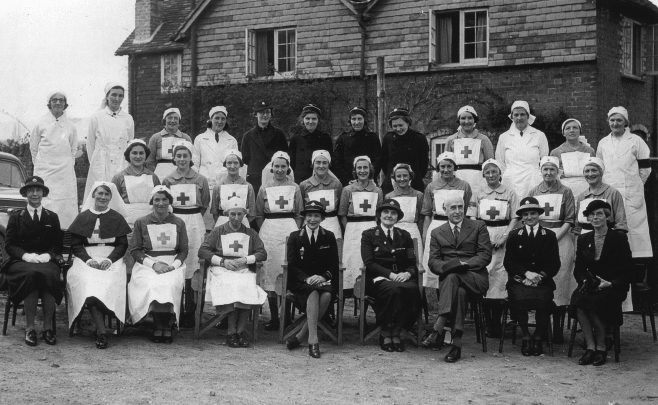 In 1941 the Red Cross and St. John Ambulance took over the big house at Combe Bank rent-free from the ‘Society of Holy Child Jesus’ for ‘the duration of hostilities’ as a RAF convalescent hospital. They also took over a big house near Swanley which became the Parkwood Auxiliary Hospital and Convalescent Home for convalescent servicemen, especially from the army. Seen here are Combe Bank Auxiliary Hospital nurses from the Red Cross with Dr. Horace Hay who acted as their Medical Officer.

Doctor Hay had been joined by a young Doctor Winder in 1938, but he was called-up within a year. Horace Hay single-handedly kept the practice going through the war years until he was joined again by Tony Winder after he was demobbed in 1945. Doctor Aidan Long joined them in 1948 and the Westerham Practice briefly totalled three GP’s, but Dr Hay retired in 1949 after eighteen years service to the town.

Comments about this page