You are here: Home>Keywords>Railway>Westerham station site after closure, view to The Crown

Westerham station site after closure, view to The Crown 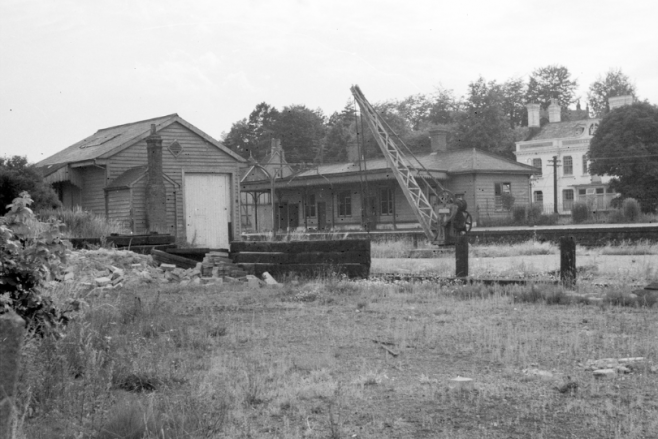 All looking rather gloomy and unloved, the goods shed, crane and station building opposite the Crown Hotel. The railway lasted eighty years, while the Crown just about made its centenary before it too, was closed and pulled down.

June Ingram “…there was a long bus strike in the late 1950s and I was at the Tech School in Tonbridge then so I had to catch the train instead. It was simpler to get on the 403 bus and go straight there, rather than have to change trains at Dunton Green, but during the strike we had no choice, that was the way they sent us. What was really good was if we rushed out of the Tech at quarter to four and really belted round the back of Avebury Avenue, we could go into the back of the station, and on platform four there was ‘the flyer’ – once a day it used to go down to Tonbridge. We’d sit on it all breathless and it would take us to Dunton Green. We had to get out there while it shunted onto the Westerham line, but you could leave your satchel and your homework on the train. You had to walk through a gloomy passageway to the other platform and then get on the train again. Another particular memory is going through to Chevening Halt to go swimming – that was a treat! We also took the train to go to Dunton Green direct because one of my mothers sisters lived there, so we used it quite a lot over the years. Walking away from the station, there was a funny old subway that took you under the line and out into the fields with a footpath to the village…”