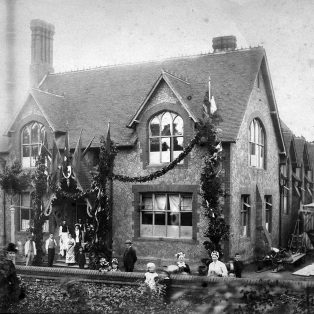 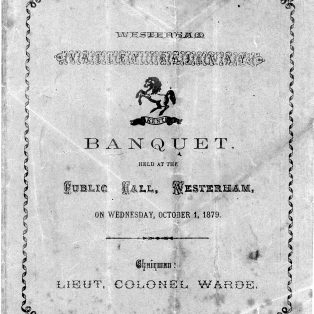 From the South Eastern Gazette, Monday July 11 1881:  OPENING OF THE WESTERHAM VALLEY RAILWAY.

“…This new line of railway which connects the small market town of Westerham with the South Eastern system, was formally opened on Wednesday afternoon amidst demonstrations of great rejoicing. For upwards of 30 years a rail communication with London has been discussed by the inhabitants, who considered it of the utmost importance so far as the trade and prosperity of the town are concerned. Land in the parishes had been on more than one occasion surveyed, but it was not until the year 1875 that the question assumed a practical shape, and then a scheme was promulgated. Messrs. Kitchin, Durtnell, Dye, Fox. and Thompson were the promoting directors, and they made arrangements with the South Eastern Railway Company that in the event of the line being constructed they should work it under certain conditions, and, in the course of time, take it entirely on their own hands. In the following year a bill was obtained, where upon Mr. J. Gower of London, was engaged as engineer and arrangements were completed with Mr. C. Chambers, of London, as contractor…”

Such was the excitement that work would begin at last, Col. Warde ordered a banquet be held in the Public Hall to celebrate the momentous occasion for which they had waited so long. Note the date on the front of the banquet menu confirms this.