You are here: Home>People>Entertainment>Town Band's Serpent 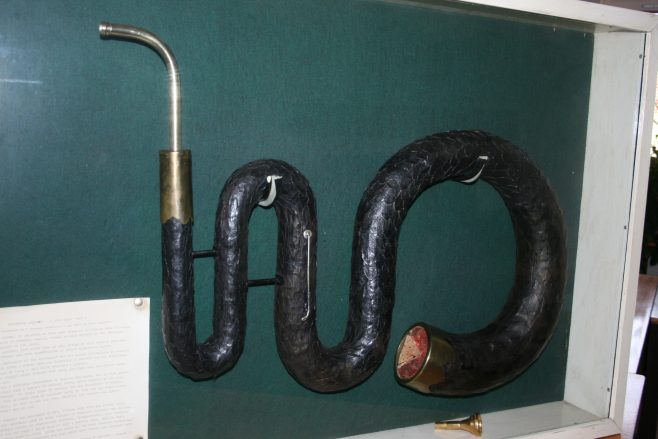 Westerham’s Town Band’s ‘Serpent’ dates from the earliest days of the Town Band in 1892  when the ‘First March of the Volunteer Brass Band’ was witnessed under the conductorship of Mr Thomas Hardes. The design of the instrument is much older than that and the Serpent may have been nothing more than a ‘mascot’ for the band and never in fact been played. Believed to have been invented in 1650 by Edme Guillame, a Canon of Auxerre, purely to give support to the Gregorian plainsong of his choir, the sonorous bass notes were so well suited to this purpose that the instrument was soon incorporated in choirs throughout France.

The instrument came to England in the late 1700s, but was difficult to play on the march, and by 1835 had been replaced by the Tuba, an altogether easier instrument to play. The Serpent was basically and 8 foot conical bore with six finger-holes, folded in a series of linear bends to reduce its length. The instrument was normally made of wood and then leather covered, sometimes with ‘tooling’ having been applied to dress the leather.

The Westerham Serpent’s leather has been tooled into scales such as those from a mythical dragon or sea-serpent, and was restored to ‘museum condition’ in 1975 by John Timpany & Co.