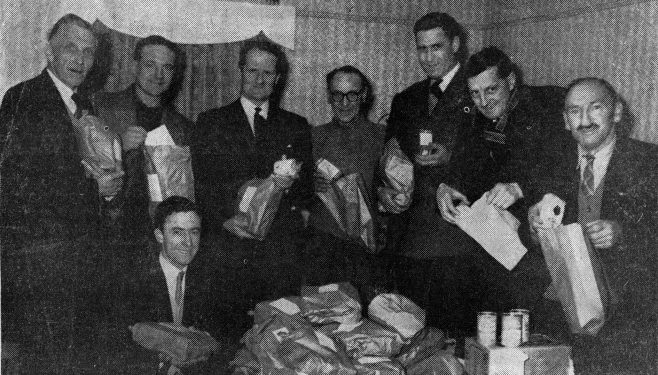 Westerham Toc H gets the rushlight

Reverend Smith wasn’t here all that long before he moved to run a Toc H home up in Yorkshire for ex-offenders – they came out of prison and didn’t have anywhere to go, so he and his wife set up a home for them.

Toc H Westerham started the tradition of the Christmas tree on the Green. Phil Johnson from Wolfe Garage used to help them, as none of them were very young men – they’d all been in the forces during 1939-45. Phil’s dad was Treasurer, local postman Ron Draper was Secretary, the Chairman was Jim Watt, the local Co-op insurance agent, and another member was a local builder, Norman Peskett – he was an entertaining man who played in John Hooker’s  band with John and Bill Taylor.

They would organise an annual outing for the children from Valence School and take them to a pantomime, and I remember when Heathrow Airport first opened, they booked one of Bowser’s coaches and took them on a trip all around the airport sites. They would also organise a children’s party for the little ones at the Barnardo’s home on Farley Common. That would be held at the Congregational Hall and I remember one year, my mother came to help and one child was missing his mum. He sat on my mothers lap for the whole party, and my Mother was longing to go off and do something, like help with the tea and cakes, but this child just sat there and wouldn’t move.

All through the year they used to run charity bingo nights at the British Legion, and the money raised was used to buy Christmas parcels for pensioners and the needy.”