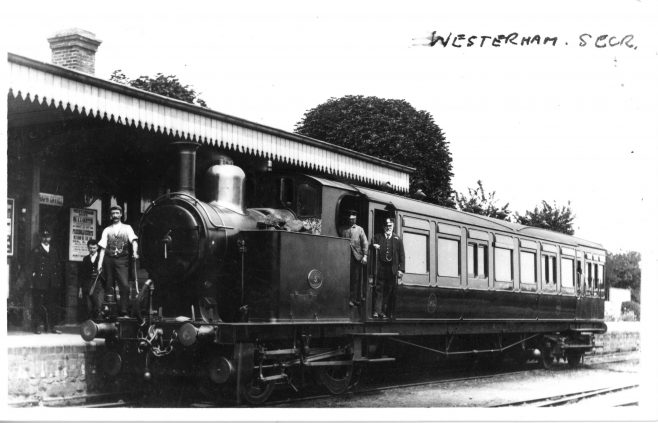 This steam railmotor number 3 from Kitson of Leeds was introduced to the branch in April 1906, and seen here waiting at Westerham.  In conjunction with the introduction of the railmotor, an unstaffed halt was built at Chevening accessed from the roadbridge by a steep flight of steps. Chevening halt had a short platform but could accommodate the railmotor carriage of 56 seats.

Often called a steam railcar, this arrangement proved very unpopular because it was slow, it rode with a sway and was all one class, being third. This resulted in a torrent of letters of complaint from first class businessmen and the local Tradesmen’s Association, as the service had been slowed down, and as business commuters, they had lost their quality seating.

No. 3 was withdrawn from the Westerham branch on 28th February 1907 and from 1st March an ordinary train and engine returned, the formation being Brake Second Class, Brake First Class and Brake Third Class all six-wheeled at that time.