You are here: Home>Places>Streets and houses>London Road Corn Stores and Car 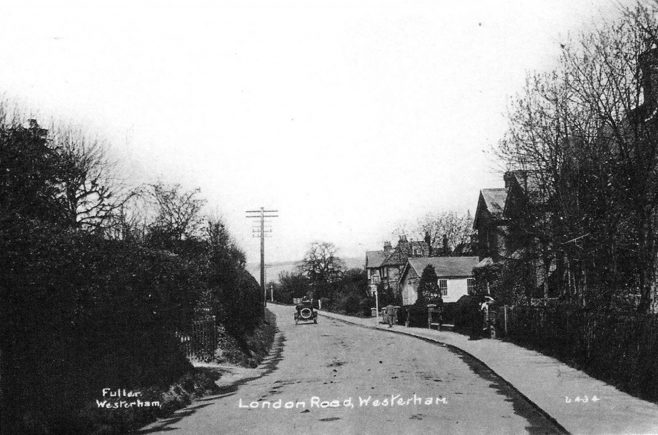 Not all buildings are demolished when their original purpose has ceased, however. The low white building the car is just passing in this 1920s photograph was built in the early 1900s as a corn store. It survived fulfilling this purpose until Charlton's the corn chandler went out of business in the 1960s. It was then rented to a variety of small businesses until it was bought up by a Veterinary Practice in 2012 and completely rebuilt internally with air conditioned reception area, consulting rooms, operating theatre and recuperation space for several dogs, cats and other pets. Externally the building retains much of its original look albeit functional without style.

This view looking north down the London Road was taken circa 1912 and shows, on the right, the white-painted Corn Store on the corner of Madan Road. In the foreground three Victorian houses are ‘Haldon’ ‘Providence Villa’ and ‘Dettingen’ and beyond the Corn Store, the large house is ‘Fairlight’. This section of London Road was known as ‘Station Road’ at that time.