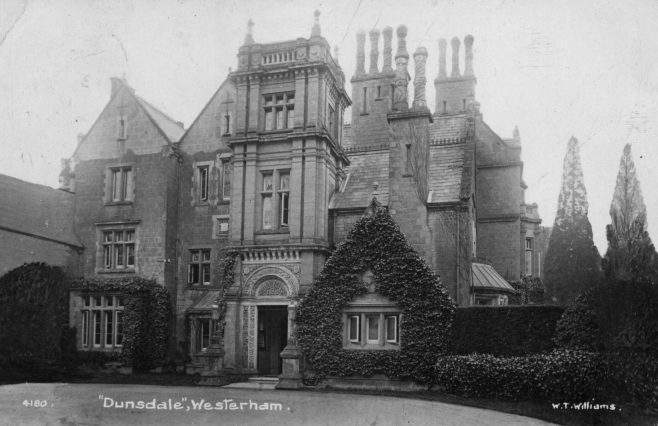 The mansion of Dunsdale was reputed to have become the dower-house of Valence and was tenanted to Bank Director Francis John Johnston from the time of purchase by Norman Watney (of the brewery family) in 1890, to the time of Francis’ death in 1911, aged 80 years. 1911 was a notable year, being also the year of death of Norman Watney of Valence, aged 77 years, and of Lt-Col. Charles Arthur Madan Warde of Squerryes Court, aged 73.

Between 1911 and 1914 Dunsdale stood empty before its conversion to a hospital by the Red Cross in that year.
Having been decommissioned from its V.A.D. status before the end of the First World War, ‘Dunsdale’ and the Farm were included in the Valence Estate auction on September 15 1917, by the trustees of the Watney estate. There being no buyer at that time, another attempt to sell the estates was launched in 1919.


On this second occasion the whole estate – Valence and Dunsdale – was purchased by Cecil Ireland Blackburn for £29,000.  The estate was at that time unaltered and the Dunsdale mansion was divided up and let to several tenants. This went on until 1929 when once again, the whole estate – Valence and Dunsdale – was put up for sale and  purchased by Percy Somer Joyce for £28,000. This was probably a speculative purchase as he then sold the following year to Ronald Arthur Vesty for £32,500. The Vestys retained the estate intact until they sold it in 1949…