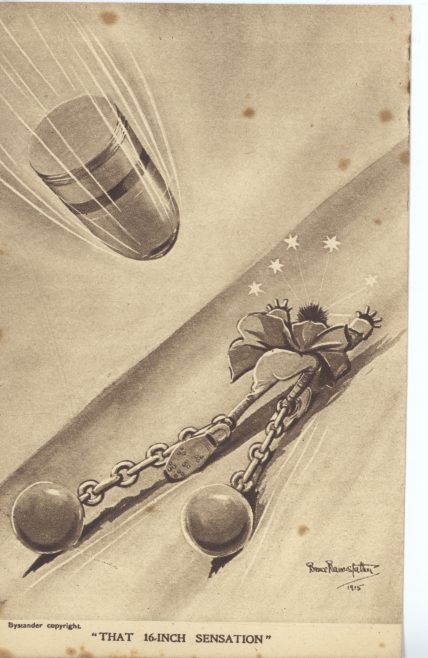 Bruce Bairnsfather was born into a military family. Initially intending a military career himself, he failed entrance exams to both Sandhurst and Woolwich Military Academies. With the same intent he joined the Cheshire Regiment but resigned in 1907 to become an artist, studying at the John Hassall School of Art. Unsuccessful in gaining commissions, he found work as an electrical engineer. A mutual friend introduced him to Thomas Lipton, however, and this led to advertising sketch commissions for Lipton tea, Player’s cigarettes and Keen’s mustard.

In 1914 he joined the Royal Warwickshire Regiment as a gunner and served with a machine gun unit in France from which he was hospitalised in 1915 with shellshocked and hearing damage.

He developed his humorous sketches for the ‘Bystander’ about life in the trenches and developed the character ‘Old Bill’ identified by his huge drooping moustache and wooly balaclava. These sketches proved very popular and were made into a large picture-postcard set, many of which are here, copied from the Geoff Hoath collection with kind permission of Phillip Hoath.