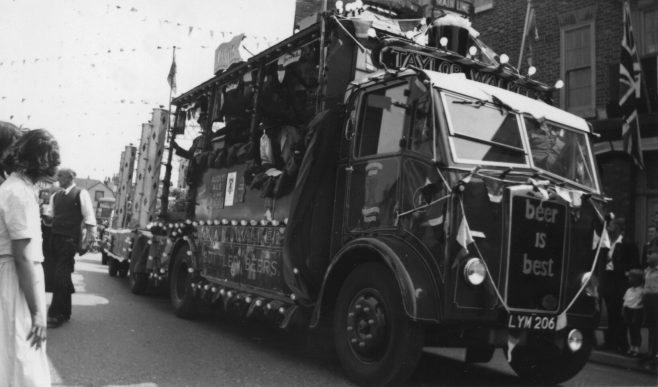 The Albion dray shown in the procession in 1953 was newly purchased by Bushell Watkins and Smith in 1951.

Don Adams worked for the brewery as a driver  “…I went all over the place for them, and it was one of the best jobs I’ve ever had. We covered a huge area, If you started at Croydon and went right across to Gravesend, the right the way round the coast through Margate, Ramsgate, Dover and right down to Bosham near Chichester and then cut back up to Guildford, then through back to Croydon, that was the area we covered from here. There were over twenty lorries, so you didn’t go on the same round every week, but I did several runs to Pontins near Chichester. One time I had to be at Guildford for six o’clock in the morning to pick up a lorry-load and take it to Cheltenham where they had a small depot distributing bottled beers to local pubs. Then I had to drive all the way back to Guildford, pick up my car and come home – I tell you, I was still sitting up driving when I went to bed that night!

The lorries were lovely to drive, but they’d got no heaters in them – there was two of us driving to Margate early one morning and as you drove, your breath froze on the inside of the windscreen, and that would go on for miles until the engine got warmed-up. We got a couple of candles and put them on the dashboard to heat the screen and melt a hole for us to see through. Well, we did this for a while until we got pulled-up one day by a copper on his motorbike and he said it was dangerous as we could have set light to the cab…”