You are here: Home>Work>Industries>Breweries>Black Eagle Brewery aerial photograph taken in 1925 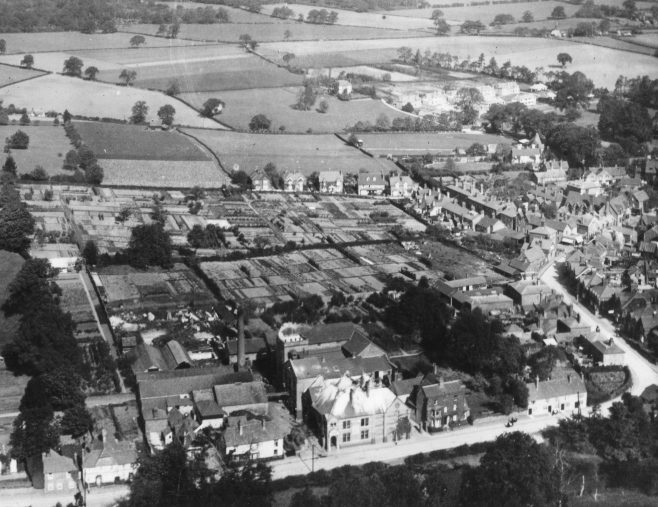 The Black Eagle Brewery and Brewery House can be seen in the centre at the bottom of this photograph. Curiously, it looks like the brewery building has snow on the roof, but this was not the case, its actually whitewash! Young apprentice boys were sent up to whitewash the roof in the summer to keep the temperature down as the hops were stored in the roof cavity.

At the turn of the Century it was planned that the Black Eagle brewery would adopt the ‘double dropping’ process in which the wort (newly brewed, fermenting beer) is first fermented for a period of time before being ‘dropped’ into a lower vessel where it continues fermentation. The dropping process has two primary effects on the beer being fermented: the trub (inactive yeast and haze-forming proteins) that has settled during the first period of fermentation will be left behind, leaving a cleaner yeast to crop during the next fermentation; the second effect is the aeration of the wort, which results in healthy clean yeast growth.

In the end these plans to convert to the double drop system never came to fruition and the brewery continued to use the alternative ‘skimming’ system of brewing until its final days.