You are here: Home>Work>Industries>Breweries>Black Eagle advertisement from 1951 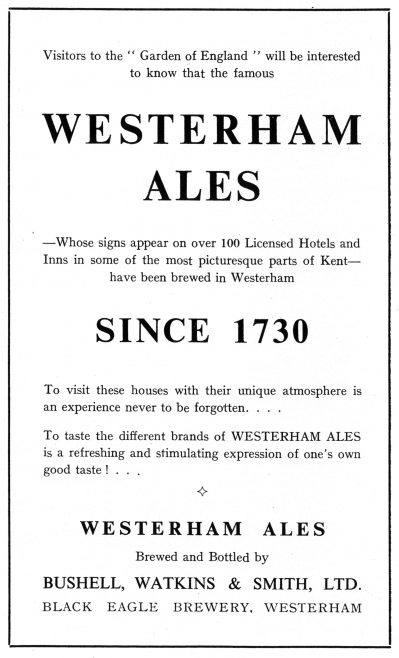 A painting dated 1920 from local artist and photographer Frederick Benson exists and is captioned ‘The first brewery built in Westerham 1730’. Acceptance of this date seems to have been based on the fact that it was carved into a keystone forming part of a building which was then in use as a boilerhouse.
Bottle labels for Westerham Ales and advertising in the 1950s proudly stated that a brewery had been “established (on that site) for more  than 200 years”.

In truth, Benson’s painting shows structures which bear a remarkable resemblance to the Victorian frontage of 1899. It is more likely that the ‘boilerhouse’ had been the malthouse described in the will of one Edward Gratwick, maltster and grain merchant, dated 1744 in which he leaves his property including a malthouse and two mills, but NOT a brewhouse, to his wife…