You are here: Home>Places>Estates>Big houses in town 3 Squerryes Lodge 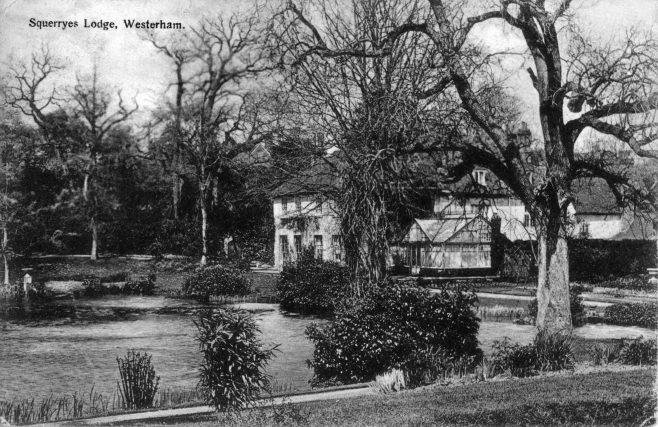 As the name implies, the Lodge of Squerryes Court, this venerable old building is tucked away at the end of Lodge Lane, on the north bank of the fledgeling River Darent.

Hookers Almanack for March 2nd 1889 records: Funeral of Mrs Mariana Warde, widow of the late Admiral Charles Warde, of Squerryes Court, who died at her residence, Squerryes Lodge, on the 26th February, in the eighty-eighth year of her age.  On the 1891 census, the Head of the Lodge was sixty-year old widow Mary Selina Griffith living on her own means. Also living there were Harriet and Katherine Warde, her spinster sisters, daughters of Admiral Charles and the Hon. Mariana Warde


The 1903 edition of ‘Wolfe-Land’ sets the scene as part of an interesting ramble beginning at Water Lane: “…For a charming walk of about five miles through diversified and beautiful country, we start by way of the Water Lane, cross the narrow stream of the Darent, and having passed through a swing-gate, turn to the right and follow the path, which affords a pretty view of a red-tiled white house and its gardens on the right, with a foreground of ornamental water, and about it a reposeful air…
This is Squerryes Lodge, the residence of three sisters of Col. Warde; probably, if its history were written, one of the most archeologically interesting mansions in the district. Within it there still exist portions of the original structure, which was most likely used as a monastic building when, in the twelfth century, the prior of Christ Church, Canterbury, held a grant of the church. Massive walls over three feet thick, heavy timbers and Norman and Trans-Norman arches — walled-up or concealed in cupboards — would seem to point to at least as early a date. Over the storeroom there is a mysterious chapel-like hall, some fifteen yards long and six yards wide, hidden away under the slopes of the roof, its floor mouldered away by time. The old-fashioned entrance hall has a richly carved overmantel, into which is let an antique painting by an unknown master of the Dutch School: and its walls are covered by oak panelling, dark with the rich tones of age, but only brought unexpectedly to light in 1889…”

Comments about this page