You are here: Home>Community>Transport and Travel>Arthur Finch as Dr. Hay's chauffeur at Borde Hill circa 1932

Arthur Finch as Dr. Hay's chauffeur at Borde Hill circa 1932 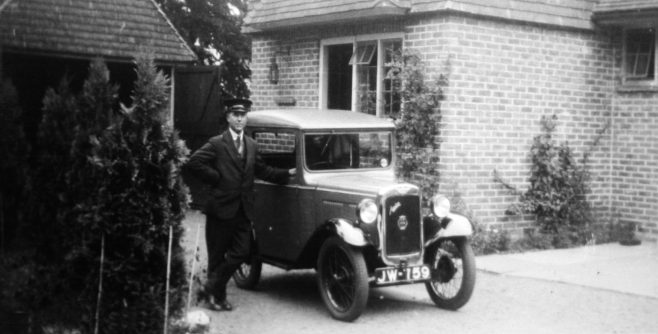 Alongside being Dr. Hay’s gardener, Arthur Finch appears to have become his chauffeur as well, probably in the early 1930s when Dr. Cotton retired. Here he is standing on the front drive of Dr. Hay’s house, then called ‘Borde Hill’ on Vicarage Hill (now renamed as ‘Old Mill Leat’).

Rosemary Pearson recalls  “…Doctor Hay’s daughter Jean moved into the new bungalow when it was first built opposite what is now Old Mill Leat. When her parents died, the original ‘Borde Hill’ was sold and Jean must have taken the name of the house with her to the new bungalow across the road. Some years later, she moved to Devon and the Church sold the old Vicarage and used the proceeds to buy Jean Hay’s bungalow, hence the new Vicarage is named Borde Hill…”